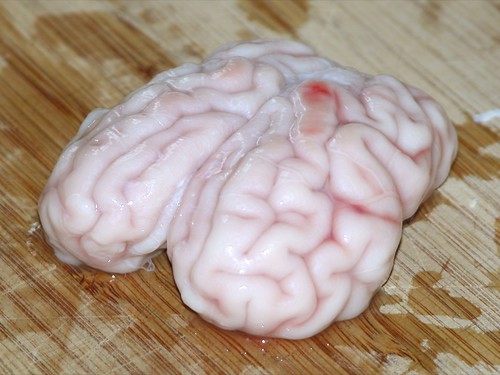 One of the problems with lamb's brains is that they look like, well, brains. So unmistakably like brains. They feel like you'd expect brains to feel like too: firm inside their membrane, but squishy and very fragile. When you handle these you can't help but instinctively use the kind of care normally reserved for donor hearts or baby birds. Maybe it's some subconscious respect for brains?

I'd never tried brains before this. I didn't even know where to get them. When I imagined asking the butcher for them, I half expected everyone around me to gasp and go silent as the butcher calmly went into the back room to call the police. When I told friends I was cooking lambs brains, most of them looked at me as if I'd just offered them a plastic bag full of used syringes. It was going to be a challenge getting anyone else to try them.

In the end the brains were lunch for one. The taster was away, my friends were all mysteriously busy or in the process of becoming busy, so I defrosted two, put some Michael Jackson on, and gots to the devouring. 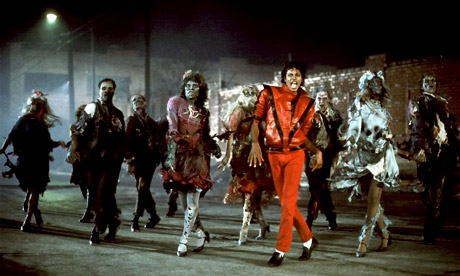 For all their flaws, lamb's brains are very inexpensive. Their shelf life is tiny so expect to buy them frozen (if you do happen to get fresh brains, use them within a day and don't delay getting them into a fridge) — most butchers I asked had at least a couple of packs of frozen brains out the back in their freezers, and the rest could get them in for me. The brains are surrounded by a thin, clear membrane with superficial blood vessels immediately under the membrane. Seriously, all the blood vessels care about is looks.

Before cooking you need to remove the membrane and as much blood as possible. Soaking them overnight in a few changes of lightly salted cold water will draw out the blood, and is meant to help loosen the membrane. Apparently after that the brain just "slips out" of its casing, but I found myself having to peel it off with the taster's eyebrow tweezers (I'll wash them!) as the exposed brain liquefied underneath. Good times.

A classic way to prepare lamb's brains is to poach, bread, fry, and serve simply with sea salt and a wedge of lemon. I wanted something a little more substantial for lunch, but the principles are the same: saltiness to lift the flavour of the brains, and acid to cut through their high fat content. Brains are deceptively rich — 1 half-brain per person should be plenty for a light starter.

Bring a small pot of salted water to a simmer, and gently poach the brain for 5-6 minutes until just firm. Remove with a slotted spoon and dry on kitchen paper. In a new pot of salted water, simmer the lentils with the carrot and celery for 20 minutes until cooked. Discard the vegetable pieces and drain the lentils. Prepare the mustard dressing by whisking together the mustard, vinegar, sugar, oils, salt and pepper. These can all be held until you're ready to start cooking the dish (the brains should be held in the fridge for no more than 2 hours, and the dressing will need to be whisked again to emulsify).

Begin by cooking the bacon in a small pan, slowly to render its fat. While the bacon's cooking you can start breading your brains. You'll need three plates: one with plain flour, one with egg wash, and one with the bread crumb and cheese mixture. Designating one 'wet hand' and one 'dry hand' will keep things clean. With your dry hand roll the poached brains in flour shaking off any excess. With your wet hand dip them in the egg wash and place on the bread crumbs. With your dry hand sprinkle breadcrumb mixture over the top, and roll around to get it coated. One brain, breaded. 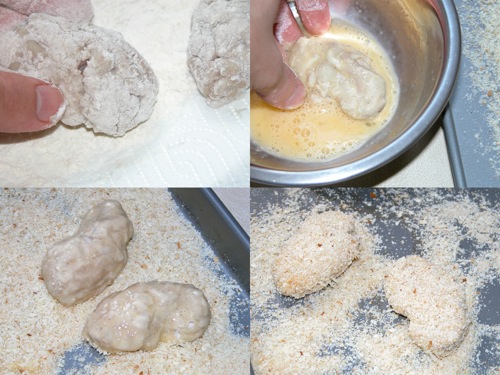 When the bacon's cooked remove it to a warmed oven with the lentils, leaving the fat behind in the pan. If you don't have enough rendered bacon fat to shallow fry, add some extra vegetable oil and bring it to a medium-high heat. Shallow fry the breaded brains for 1-2 minutes a side until nicely browned, then remove to paper towels in a warm oven while you cook the rest.

To plate up mix the lentils, bacon, and dressing together, arrange the brains on top, scatter with watercress leaves, and say a prayer. 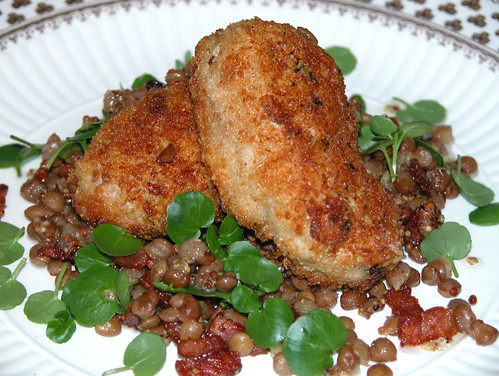 Looks pretty good, no? Should a top-secret recombinant virus escape from a nearby government lab and turn Adelaide in to an army of the undead I'll be a hungry zombie — I did not like these at all. Their texture was smooth but had a unpleasant waxiness. It was slight, but noticeable. But the worst thing was the taste. I'd been lead to believe that lamb's brain was more about texture than taste (oh god) but I thought they had a really unsettling raw taste to them, that didn't go away even when I intentionally overcooked one. Not the kind of raw taste you get from a rare steak or blushing pink lamb, more like uncooked chicken. So I guess you could say lamb brains taste like chicken.

Did I buy dodgy brains? Did I prepare them badly? Once they invent the technology from Eternal Sunshine for the Spotless Mind that allows you to erase memories I'll have a crack at the other 4 wrapped in my freezer (an awkward situation should the police ever search my house). It just won't be for a while.

(P.S. The lentils were great.)