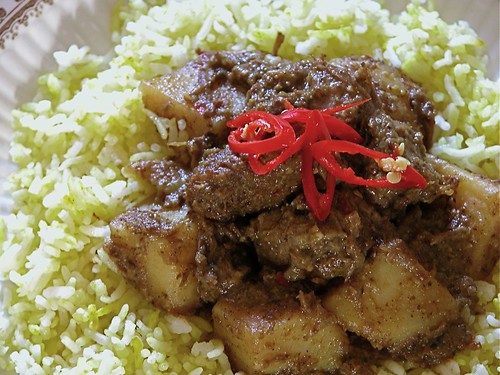 Time surges on, and now it's only two short weeks before Lucy's off to Japan. I cooked dinner for her relatives who were visiting Adelaide, and at her request: beef & potato vindaloo. I know, I know, vindaloo is made with pork. Even if it were made from meat other than pork, Indian Hindus would disapprove of beef. And despite the presence of "aloo" in the name, the dish traditionally doesn't contain potatoes either. But when traditional Indian cooking is leaving the country for a year, then I'll make it the way traditional Indian cooking likes it.

My Mum's side of the family are Portuguese-Indian from Goa, which would be an excellent launchpad to talking about how much this classic Goan dish means to me and my cultural identity. That stuff would kill. Unfortunately I've never actually had a proper vindaloo outside of a restaurant, so like most regular schmoes I used a recipe. Be careful when selecting a recipe — it shouldn't contain tomatoes, yoghurt, or god forbid, cream (really it shouldn't contain beef or potatoes, but that aside...). The recipe that I used (below) suited making it with beef and potato, but the best and most authentic vindaloo I've ever made was from this recipe on eGullet (pictorial here). Try both, you won't be disappointed.

1. Heat a heavy-based pan until very hot, then toast the cumin, dried chilies, peppercorns, cardamon seeds, black mustard seeds, and coriander seeds for about 2 minutes. Add the fenugreek seeds in for the last 15 seconds. Remove to a spice grinder or mortar and pestle and grind.
2. Reduce the now empty pan to a medium heat and cook the onion until it begins to colour. Add the ginger and garlic and cook for a further two minutes.
3. Combine the cooked onion mixture with the ground spices and the salt, sugar, vinegar, and turmeric in a blender or mortar and pestle. Blend/crush this to a paste and set aside. 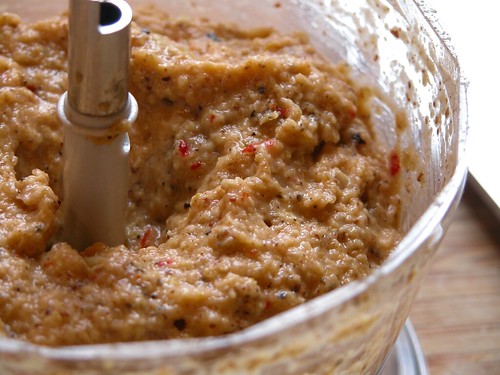 4. Brown the beef in a hot pan with some oil, then reduce the heat to medium and stir the paste through the beef. Cook for 2 minutes, stirring, then add 300 ml water and simmer, covered, for 1.5 hours or until the beef is just tender.
5. Once the beef is just tender, add the cubed potato and simmer uncovered for 25 minutes or until the potatoes are tender and some of the liquid has reduced. Season to taste and serve with basmati rice and cucumber raita.

This curry is spicy, but it won't knock you flat. If you find that your curry tastes bitter, you may have burned the spices at the beginning. Fenugreek seeds and turmeric are very sensitive to overcooking, so be sure not to cook these for the same time as the rest of the spices.

I served mine with aromatic saffron basmati rice. It is so simple that it doesn't warrant its own recipe box. Simply stir 3 cardamon pods, 3 cloves, and half a stick of cinnamon in with your uncooked basmati, then cook as you normally would. Heat 1 tbsp of milk (microwave and a shot glass work for me here) and add 1/4 tsp of saffron threads. Leave this to infuse colour and flavour while the rice cooks. When the rice is done, stir the saffron milk into the rice.