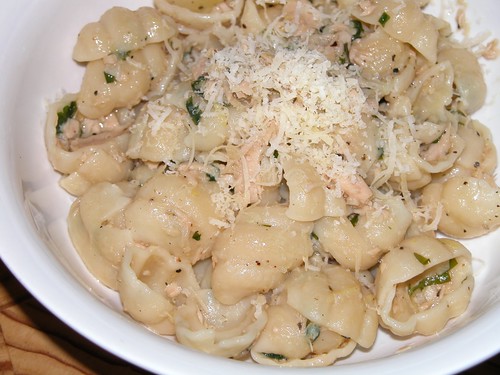 Pasta water, amazing stuff. Used correctly it can boost the flavour and texture of your dish and improve the marriage of pasta and sauce. By now most people know that pasta water is a good thing, but I still wonder how many use it unless a recipe specifically tells them to. (For those unacquainted, pasta water is the water left in the pot after pasta is cooked, that is usually poured down the drain)

Getting the most out of pasta water:

In this dish an emulsion of pasta water, olive oil, and lemon juice coats the pasta and makes the recipe a great one to practice with (it also tastes really good).

1. Cook the pasta until almost al dente in well-salted water.
2. Meanwhile, slowly sauté the garlic for 5 minutes until it softens. Turn up the heat, add the tuna and parsley and cook for 2 minutes. Add the lemon zest and juice and turn off the heat.
3. Once the pasta is ready, drain it reserving 1/2 a cup of the cooking water. Add the pasta to the pan with 1/4 cup of the saved water and a generous helping of pepper. Toss over high heat until the pasta water has almost evaporated, tasting for seasoning.
4. If the pasta is tasting too acidic, drizzle some more olive oil and toss to emulsify the oil. Serve with grated parmesan cheese.

(1) This isn't gnocchi as in potato dumplings, it's a type of dried wheat pasta. It's a larger version of the more common gnocchetti. Use whatever shape you have on hand.