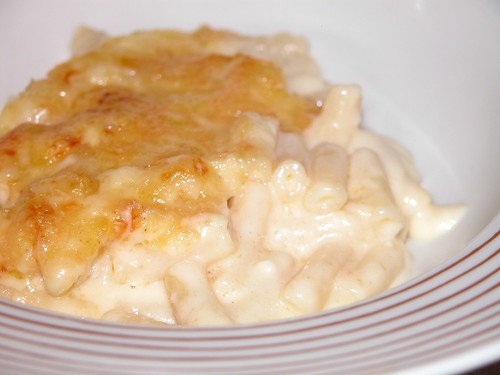 My earliest memory of food is me sitting on the sofa while Mum was in the kitchen making her macaroni cheese. I say 'her' macaroni cheese because as far as I know it was no one else's. When I tell friends about it they look at me in disgust, as though I was describing a bolognese sauce made from ketchup and spam. Her macaroni cheese had shades of semi-homemade, this can't be denied, but between the ages of 5 and 14 it was my favourite thing to eat.

The recipe was simple: boiled macaroni, and kraft cheese spread. Had I understood as a kid how easy it was to make I would have used this to campaign for macaroni more often, but I doubt my body would have tolerated such a move. When asked how much I wanted I would say, "Make bulk!" I didn't know what 'bulk' meant but I knew it was what I wanted. Sitting at the dinner table I'd take one piece of macaroni at a time, eat the sauce first, then eat the piece of pasta. This drove my younger brother and sister crazy, who had to wait for me to finish before they could have seconds.

If you gave me a bowl of Mum's macaroni cheese today it would be gone in a second. I love it, but it's just not the same unless Mum makes it. These days I still eat macaroni cheese, but the kind that wouldn't cause Martha Stewart to punch me in the face. It's a typical pasta + mornay sauce recipe, where a mornay sauce is a béchamel sauce with cheese added.

Ingredients (serves 2, or 1 if you're invulnerable to heart disease):

1. Cook the macaroni in lightly-salted water. When done, reserve 1/2 a cup of pasta water then drain and set aside.
2. Meanwhile, combine the butter and flour in a saucepan over a medium heat2. Cook for 2 minutes, stirring to avoid coloring or burning the mixture.
3. Add 1/4 cup of the milk and stir with a wooden spoon3 to incorporate. Once incorporated, add some more milk, stir to incorporate, then repeat until you've added all the milk. Stir in the mustards, then cook over a low heat for 5 minutes to get rid of any raw flour taste.
4. Add the cooked pasta and all but one handful of the cheddar, and stir to combine. If it's too thick and sticky, stir in some pasta water. Taste and adjust the seasoning as necessary.
5. Remove to a baking dish/oven-proof bowl and toss the remaining cheddar over the top. Sprinkle the grated parmesan over this and grill (aka broil) until the top is golden brown4.

(1) I use aged cheddar, which sounds fancy but is really a simple jack-of-all-trades cheese sandwich cheddar I get cheaply from the friendly cheese peoplea in the markets.


(a) The cheese people are so called because they're made of cheese. They also sell cheese, which is a bit cannibalistic, really.
(2) This, you no doubt know, is called a roux (pronounced 'roo'). It's meant to be equal parts butter and flour, but who can be bothered measuring? For posterity, this time I weighed 1 tbsp of butter (14 g) and added 14 g of flour. So you can go by appearance rather than painstakingly measuring things, here's a photo of the consistency of equal parts butter and flour: 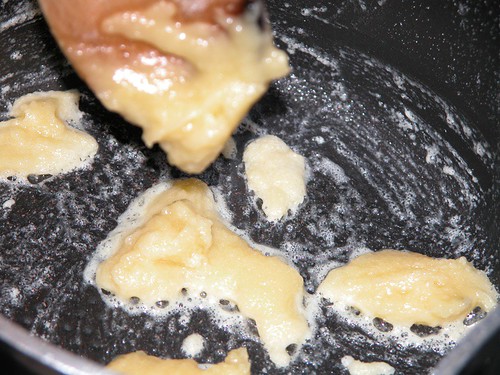 (3) You could use a whisk, but I find it's easier to get the bits in the corner of the saucepan using a wooden spoon.
(4) My go-to cheesey crust. I love how the cheddar on the bottom gets melty while the parmesan on top goes crunchy.