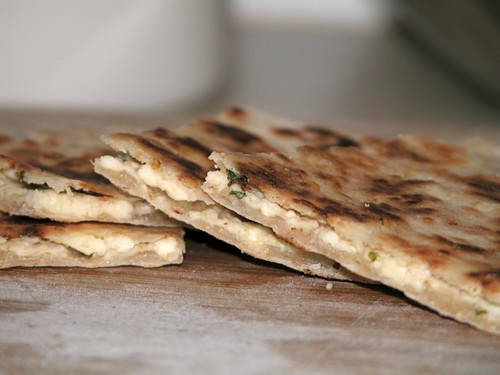 I remember the first time I made parathas. It was a few years ago when I was starting to become interested in cooking. An indian friend heard about this, and suggested I make aloo parathas.

"They're so easy, just make a simple dough from flour and water, wrap it around some spiced mashed potato, roll it flat with a rolling pin, and cook it on both sides like a pancake."

In her defense, that is pretty much what you do. Although her instructions assumed a fair degree of prior cooking knowledge, she was so confident that I couldn't let her down by admitting confusion. The resulting parathas were a spectacular failure, suitable for little other than homemade grout in DIY bathroom renovations.

Fast-forward four years. I can now successfully boil water, toast bread, microwave beans, and if I may say so myself, cook a pretty decent paratha. This recipe would be nothing without Manjula of Manjula's Kitchen. While my paratha dough recipe is slightly different, I learnt the technique from her videos and my parathas feature Manjula's (extremely easy) paneer as a starring ingredient. I've used paneer (an indian cheese) here, but you can fill parathas with anything including potato, spinach, lentils, or minced meat.

1. Combine the flours, water, and salt in a bowl. Once mixed, turn out onto a bench dusted with flour and knead for 5-10 minutes. Then, work the ghee into the dough. Set aside and rest for 10 minutes to 1 hour.
2. While the dough is resting, make the filling: mix together the paneer, ginger, turmeric, cumin, yoghurt, coriander, and salt.
3. Divide the rested dough into 4 pieces. Dust your bench with flour, and roll each piece of dough out to a ~10 cm circle. Put 1/4 cup of the paneer mixture in the middle, and bring the edges of the dough up around the filling, like sealing a dumpling. The technique is best illustrated in this video. Rest each dumpling for 10 minutes.
4. Once rested, dust with flour and roll out to ~0.5 cm thickness (again, see the video). In a heavy pan preheated to medium-hot, cook the parathas until browned on both sides (no oil required). Brush with ghee and serve.