This is not a bolognese 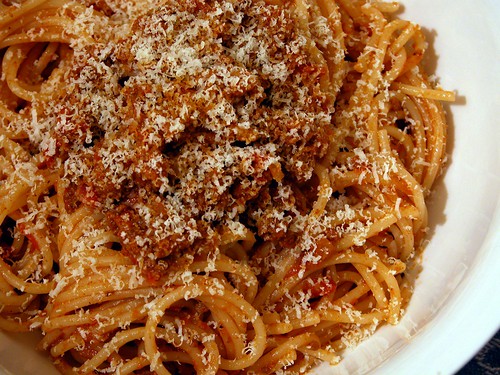 Only a fool would be stupid enough to lay claim to a "traditional" Italian recipe. In Sicily they kill you for saying that sort of thing, by way of old Italian women hitting you with rolling pins. Even in Italy, the idea of what's authentic changes from one kitchen to the next.

With that in mind, I make no claims that this is a traditional ragu alla bolognese. It's not served with fresh tagliatelle and it does contain tomato. If that offends your orthodox sensibilities, either cover your eyes or polish your pitchfork because you won't be happy with the anchovies or star anise. But isn't it possible that this wide world of food might just be big enough for more than one Italian meat sauce? Let's make a deal: I won't call this real bolognese, if you concede that science and the expertise of Heston Blumenthal (oh, only the man behind the best restaurant in the world) might possibly, you know, maybe, make for a recipe that isn't so bad?

If you can get past the big deviations from tradition and understand why they were made, you'll find that this recipe (based on Blumenthal's from the Times) really isn't so inauthentic. Consider this:

A recipe for food you want to eat is after the jump.

1. Cook the onion, garlic and star anise on a low heat for 30 minutes, stirring occasionally to prevent browning. Add the carrot & celery and cook for another 20 minutes.
2. Preheat the oven to 120ºC/250ºC. Stir in the meat and cook over a medium heat until the mince is cooked through. Season well with salt, then add the anchovies, milk, and nutmeg and cook on a medium-low heat until the milk has just about evaporated (the anchovies will dissolve into the sauce).
3. Add the white white and tomatoes, and bring to a simmer on the stove. Transfer to the oven, covered, and cook for at least 6 hours. Check it every now and then, and if it's simmering too fiercely add half a cup of cold water and turn the oven down.
4. When at least 6 hours is up and you can't bear to wait any longer, remove from the oven and season generously with cracked black pepper.

(1) Use mince from a cut of beef that's not too lean if possible. I recommend chuck.