10 ways that puttanesca got its name 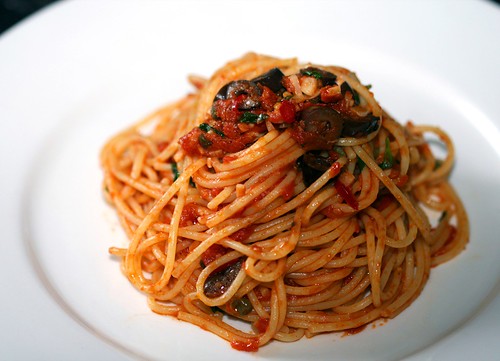 Everyone knows that puttanesca means essentially 'whore's pasta'. However, the specifics of how it got this name are disputed to this very day. I've done a little research to collect some of the most likely origins of the name, and in case you're wondering, no I didn't just make some up to get ten.

Which one of these ten equally legitimate suggestions is the true origin of pasta puttanesca we may never know, but thankfully the recipe has remained intact throughout the ages. And here it is.

1. Boil a pot of salted water and add the spaghetti. You can make the sauce before the pasta finishes cooking.
2. Sauté the garlic with the olive oil on a medium heat for 2 minutes. Add the anchovies and chilies and cook for a further 30 seconds.
3. Add the tomatoes and parsley, and cook over a high heat until the tomatoes break down and thicken. Remove from the heat and stir in the olives1 and capers. The sauce can then be held until the pasta is cooked.
4. Once the pasta is almost al dente, drain it and toss with the sauce over a high heat. Add a little pasta water if it's looking too dry. Serve with grated parmesan.

(1) I find the olives can get bitter if you add them earlier and cook them with the sauce.