Things not to attempt hungover: Pizza with tomato & pesto 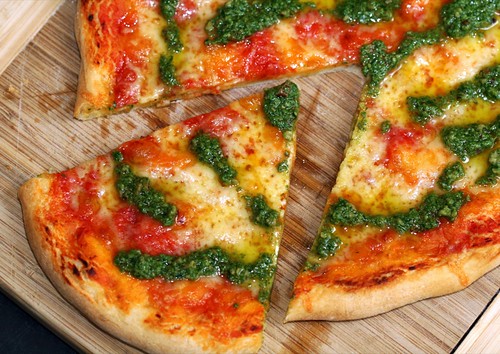 It took a while to get lunch out today. I woke up at 10:30 with a dry mouth and the punishment for a night of excess throbbing in my head. It was another hour before I was mobile enough to fetch 2 paracetamol for breakfast, which hit the spot but were frankly a touch bitter and powdery for my palate.

There was focaccia dough in the fridge (a new recipe), but it stuck to the bowl when I tried to remove it for shaping which was dispiriting enough to quash that idea — I made pizza instead. It was quite good really, but not the best I've made. Part of the problem was lazily not allowing it to rise enough, but the dough itself unsurprisingly would be better suited to focaccia. Keeping in mind that every step placed successfully ahead of the previous one was a small victory this afternoon, I'd still call this a moderate success.

1. Mix together the warm water, yeast, and olive oil and let stand for ten minutes. Meanwhile combine the flour and salt in a large mixing bowl.
2. Add the yeast mixture to the flour and stir together with a sturdy wooden spoon. Turn out onto a lightly floured bench and knead for 10 minutes, or knead in an electric mixer until the dough is smooth1.
3. Rest the dough in a warm place for 1.5 hours then knead for 2 minutes, shape into a ball, lightly oil the dough and place it in the fridge, covered, for 24-36 hours.
4. Bring the dough to room temperature for 1.5 hours while preheating the oven and pizza stone as hot as you oven will go.
5. Gently pull the dough ball to about 3/4 cm thickness2. Top with whatever you like3 and bake on a pizza stone until the crust is golden brown and crispy (about 10 minutes).

(1) This dough is quite wet and a little challenging to knead by hand. If you have an electric mixer I suggest using it.
(2) Don't roll it with a rolling pin! This will get rid of all the bubbles you've spent 24 hours creating.
(3) I topped mine with a simple tomato sauce made from blending uncooked canned tomatoes with salt. On top was some terribly inauthentic supermarket cheddar (which I added 5 minutes into cooking to prevent it burning), and pesto added after the pizza was cooked.