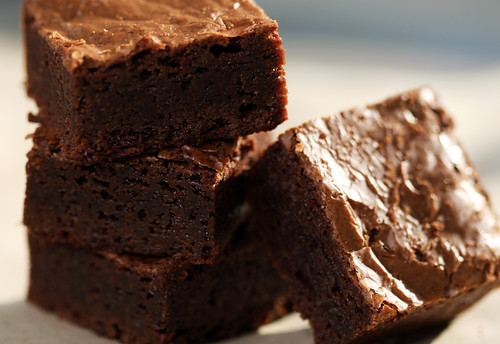 Brownies trigger fond memories in me. I wish I could say that they brought me back to the smell of my childhood kitchen as Mum baked a fresh batch, but the reality is far more prosaic and mundane. Rather, when I think of brownies I think of a bad day at work, coming to the end of a seemingly interminable ward round to find that some goddess among women (it's never the guys) has brought a plate of brownies to share in the tea room. It's not worthy of Proust, but dammed if a good chocolate brownie doesn't lift a bad day.

Like any man of good taste I prefer my brownies fudgy, and feel that adding nuts only serves to get in the way of that smooth, chewy texture. Unfortunately this is at odds with the fact that nuts taste great and pair perfectly with chocolate. But there is a third option. Ever since I learned that vanilla extract was simply alcohol infused with the flavour of vanilla beans, I've had fun experimenting with other liqueurs in its place.

Most nut-flavoured liqueurs are suitable substitutes for vanilla essence in desserts (especially custards), not because they taste the same but because they tend to pair well with the same things. Frangelico, a hazelnut liqueur, works particularly well owing to its status as the best damn liqueur there is.

Credit for the basic recipe that I've adapted goes to Martha Stewart by way of Emma. Even if you don't use Frangelico, this is an excellent go-to brownie recipe. Just be sure to share the love in your local tea room.

1. Preheat an oven to 180ºC. Melt the butter, chocolate, and cocoa powder in a double boiler or (carefully) in the microwave. Set aside to cool.
2. Beat the eggs, sugar, and Frangelico together in a large bowl until the mixture becomes pale and thickens slightly. Fold the chocolate mixture into the egg mixture.
3. Sift the flour, salt, and baking powder into the egg and chocolate mixture, and stir together until just combined.
4. Transfer the mixture to a lined, greased 8 inch square brownie pan and cook in the oven for 30 minutes. Allow to cool before cutting for best results.

Posted by Tim. # Link to this post
Cooking, Recipes, Sweets