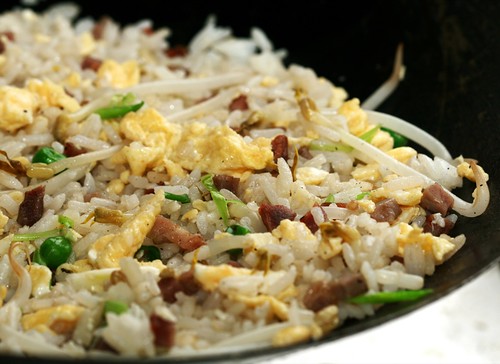 I used to grudgingly tolerate my old electric stove. It was my first stove, a fact that won it countless free passes. I could be cold and moody, but the two of us knew each other. It wouldn't short circuit or flame up if I let a pot bubble over, and I learned to keep two hotplates on at different temperatures when I needed to overcome its slow responsiveness. Sometimes it was hard work, but that's what they say about love — there's no denying it, that stove and I made some beautiful food together.

Fried rice changed things. Back then I truly believed that while an electric stove made a lot of things harder, it didn't make anything impossible. I attempted fried rice on it (like most of my workarounds, it involved cast iron) and while the results were good, it wasn't right. Maybe if I'd tried harder I could have made restaurant-quality fried rice, but then the next week it would be the same thing all over again with crispy-skinned salmon. Deep down I knew the fried rice was just a symptom — I had to face the difficult realisation that my stove was holding me back, that it was me making all the compromises. When I came home from a busy day hungry for a quick, smoky stir fry it was me spending extra time enacting all of these elaborate workarounds. Me! And the stove had been at home doing nothing all day!.

A week after I disconnected the electric stove, I already had a shiny new stainless steel gas range. Call it a rebound, but it's been 8 months and I've never been happier. I still remember the first night I got the gas hooked up and made a huge bowl of fried rice. It was delicious. The gas stove opened a lot of doors, but for me conquering fried rice was something special, something necessary. I've made it a lot since then, and it only gets better. Please, gentle reader, allow me to share with you these things I have learned.

Say the name 'fried rice' and everyone will think of one thing. Each person might be picturing a totally different dish, but they will all have a firm idea of what constitutes fried rice. The idea of one definitive fried rice recipe is a myth — soy sauce (or no soy) isn't a heresy, it's simply a variation. Many different cooks have fried rice in their own style over the years, and we're better off for it.

What I'm saying is that I don't want a bunch of comments along the lines of "I'm Chinese and my Mum adds soy sauce and what would u know your [sic] ugly!1" This recipe is what I've found to be closest to the rice served at Chinese restaurants around here, which of all of the named variations is closest to Yangzhou fried rice. Anyone who's eaten Chinese takeaway will know exactly what I mean — the tiny prawns, bits of char siu pork, peas. Yeah, you know what I'm talking about.

In my experience, the two most important things that separate this fried rice from the rice I used to make on the electric are intense flame, and a good wok. The two go hand in hand — a wok only becomes a good wok after many nights cooking over high heat. And I mean high. While cost factored, the driving consideration in choosing my new cooktop was that it have one burner that burned hotter than anything else in its class. Without spending a fortune I was able to find that, and I am so glad I spent the extra time searching.

Preheat your wok for as long as it takes, because that thing needs to be smoking. Another thing you hear about with fried rice is the trick of using day-old cooked rice. You know what? I'm not on board. While it's true that the grains of day-old rice are more separate, I find that they're too dried out. If your heat is high enough then fresh rice will separate, still remaining fluffier and better to eat day-old. If I'm making fried rice from leftovers, I'll often add a few tablespoons of water to the wok to 'freshen' the rice.

The final thing from this recipe that I can't let go unexplained is MSG. I have a bad habit of asking Chinese restaurant chefs for their secrets, and a large majority of Chinese restaurants do use MSG in their cooking. Like any seasoning the best chefs use it with an experienced hand, but they still use it. Leave it out if you like — it's your dinner — but don't be scared off by MSG's since-debunked bad reputation. Some people are allergic to it, but no higher than the standard incidence of food allergies. You can buy it in the supermarket labeled either as 'MSG' or under some euphemistic name such as 'flavour enhancer'. Give it a try.

(As an aside, if you do try it then claim it gave you lower back pain or diabetes or some such, let me know — I have a therapeutic magnetic bracelet you might want to buy.)

The amounts aren't important. If you like char siu, put more in. It's all about the technique.

1. Heat about 1 tbsp of peanut oil in a medium-hot wok, then add the whisked egg and tilt the wok to spread the egg halfway up the sides of the wok. Cook until there is just a small amount uncooked, then remove to a bowl. Break it up roughly with chopsticks or a fork.
2. Return the empty wok to a very high heat, then add some more oil3and heat until smoking. Add the rice, pork, prawns, and peas and toss to distribute the ingredients through the rice. Break up any large clumps of rice with chopsticks or the back of a spatula.
3. Add salt to taste, and continue cooking and tossing occasionally until you just start to cook the outside of the rice grains. You will know this it happening because they will stop sticking together as much.
4. Remove from the heat and immediately toss through the reserved omelette, beansprouts and spring onions. Season with MSG (cautiously) and salt to taste.

(1) If you've ever had fried rice before you'll know what I'm talking about — they're the tiny, pink prawns that come already shelled, cooked, and frozen.
(2) Frozen is completely okay. In all honesty, if I had fresh peas I doubt I'd use them to make fried rice.
(3) The amount of oil varies depending on how much rice you're cooking, but as a guide I'm talking about something in the tablespoon range.