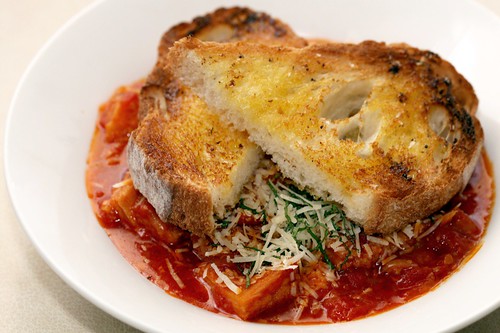 I don't blame anyone for being hesitant about tripe. It looks weird, it can be unpleasantly chewy, and physiologically it's a tube for poop. A tough sell, really. But let's make a deal: I'll give you one recipe for tripe as it should be, and if you still don't like it I will never bug you about it again. In fact, I'll never bug you about anything — I wouldn't want to get on the bad side of someone who is so obviously insane.

There is one thing to remember when cooking tripe: cook it until it is done. When I was a kid I remember having the thought, "why don't our intestines digest themselves?" (Boy was I a popular kid). Now, years later, I understand — intestines don't digest themselves because they're made of something very, very tough: intestines. This is originally a Mario Batali recipe, and frankly his recommended 1 hour of braising is wildly optimistic unless you're intending to serve a hearty bowl of leather. Rather, check the tripe every hour and allow plenty of time if you need it to be ready for dinner that night — mine took 3 hours to achieve the melting tenderness I was after.

Serve it with some buttery toast to soak up what's left, and you'll never look back.

1. Place the tripe in a non-reactive pot with the vinegar, vanilla essence, and enough water to cover by 2 inches. Bring to a boil, then turn down the heat and simmer, covered, for at least 1 hour. Check the tripe every hour and cook until it is completely tender.
2. Drain the tripe, and once cooled cut into 1 cm strips. Heat the olive oil to medium heat, then add the onion and garlic and cook for about 5 minutes until softened. Add the sliced tripe and chilli flakes and cook for 3 minutes. Add the tomato sauce, adjust seasoning, and simmer, covered, for 30 minutes.
3. Meanwhile, combine the cheese and mint in a bowl. When ready to eat, toast the bread on both sides on a grill or broiler, then spread generously with butter. Season with salt.
4. Spoon the braised tripe into a bowl, sprinkle over the cheese mixture, and serve with the toast.

(1) Although I've never experienced the funky taste that some people associate with tripe, the addition of a small amount of vanilla extract is intended to counter that.