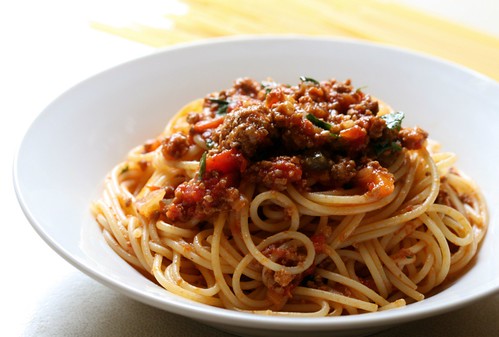 You may remember my version of ragu alla bolognese from a few months ago. It was quite a big deal, in all the papers. That was in the middle of winter, when a hearty, rich meat sauce over fresh pasta was the perfect comfort food. Now as I look down the barrel of an Australian summer, long slow braises, as good as they are, are making way for lighter, brighter foods.

This bolognese is more 'southern style' — by which I mean Naples rather than Louisiana (and by which I mean Naples, Italy, rather than Naples, Florida) — but once again I would not be so foolish as to claim authenticity. While my meat bolognese had depth of flavour with many different flavours melting together, this sauce has lots of clear individual tastes. Everything is left relatively chunky so you get individual bursts of flavour in eat bite, and the amount of tomatoes make it as much a tomato sauce as a meat one. Some chillies for kick and anchovies to round it out, and you're in business.

Unlike my other bolognese this works much better with dried pasta. I also make bulk and freeze it, so rather than putting fresh herbs into the sauce and dulling their flavour in the freezer I tend to instead toss them freshly-picked together with the pasta and sauce before serving.

1. In a wide pan, heat 3 tbsp of olive oil to a high heat and add the mince and some salt. Cook until the mince is well-browned, breaking up the mince so there are still some medium-sized chunks.
2. Add the wine and scrape the fond off the bottom of the pan while it sizzles. Turn the heat down to medium, ten add the onion, carrots, celery, and garlic and put a lid on the pan to let the vegetables sweat.
3. Add the anchovies, chillies, and tomatoes and bring to a high simmer. Grate the nutmeg over the pan, then reduce the heat to low and cover. Cook this for about 35 minutes or until the vegetables are completely tender, then salt to taste.