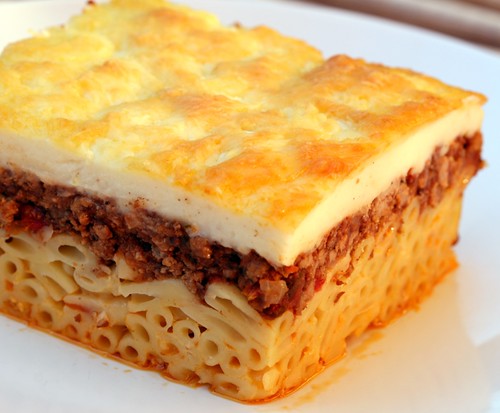 Continuing the Greek theme, I give you pastitsio, the ultimate in Greek comfort food. Much like lasagna, baked ziti, and other baked pasta dishes this is one of those meals that you find yourself sneaking back to a few hours after dinner. When I made this particular batch, if it weren't for my competing desire to leave some for the following day's lunch I'm quite convinced I would have eaten the whole thing in one sitting.

Simplistically, pastitsio is a later of pasta (ziti or macaroni, fastitiously arranged in rows if you can be bothered), topped with an aromatic bolognese, a thick layer of béchamel, some grated cheese, and baked. All of these layers are important and delicious, but the element that really makes a pastitsio sing is the bolognese. Unlike an Italian bolognese this is flavoured with cloves, cinnamon, Greek oregano and bay, which should be used in large amounts to impart a noticable flavour. The recipe for this bolognese is below, but for the rest I'm simply describing the process since the exact amounts will vary depending on the size of your dish.

For the pasta, as well as being tossed with parmesan (or any hard cheese) the pasta is mixed with egg — not so much for flavour but rather to glue the pasta together for easy and attractive servings. The béchamel is your basic white sauce: butter, flour, milk, salt, white pepper, and a grating of nutmeg. Once it's all assembled, grate some cheese on top and bake at 180ºC until golden on top (about 50 minutes).

1. Heat a heavy pan until very hot, then add the olive oil, beef mince, and some salt. Cook, stirring and breaking up occasionally until the meat is very well browned, then remove and set aside.
2. In the oil left behind in the pan, add the onion, garlic, and cloves and turn the heat down to low. Cook until the onion is translucent.
3. Add the remaining ingredients, the reserved beef, and 1/2 cup of water, then cover and cook on a low heat for 2 hours.