Do you struggle with the pain of defrosting? 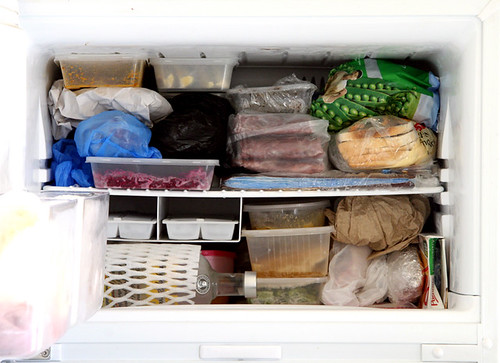 Defrosting is a subject close to my heart, dear reader. You see, since my hot water heater broke on the longest weekend of the year I've become unwillingly acquainted with cold showers, and the invigorating experience — although character-building — has left me with little tolerance for anything frozen.

Defrosting frozen ingredients can be a pain. If we were all organised and planned ahead we'd have put that frozen steak in the fridge the night before. But we're not. Instead we got home from work 30 minutes before dinner, and patiently waited for it to defrost on the kitchen counter, before giving up and putting it on 'defrost' in the microwave with lackluster results1. In my head this is the part of the infomercial where failing to cut the overripe tomato with the splintered end of a wooden spoon, the attractive but sensibly-dressed housewife throws her hands up and exclaims, "There's got to be a better way!"

And there is! No longer will you have to struggle with molten lava or the power of prayer only to end up with meat that's cooked on the outside and frozen on the inside.

What you need is something warm enough to heat up the food without being warm enough to cook it. The air in most kitchens is pretty warm, but air is a terrible conductor of heat. Water is better, which is why some people defrost items in their kitchen sinks. This works, particularly for irregularly-shaped ingredients such as a whole chicken, but you have to remember to change the water regularly. 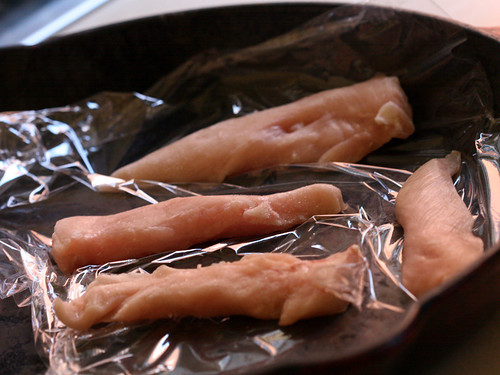 The best heat conductor in any household kitchen is obvious when you think about it: pots and pans. Metal's excellent heat conduction is one of the reasons we use it on the stovetop, but it's just as useful at room temperature. The heavier the pan, the better — more heat capacitance means a longer time before the pan cools down too much to be effective. For flat, regularly-shaped objects such as bread and filleted meat this method works efficiently without adverse effects, using equipment you already have. Give it a try — it also works to bring refrigerated meat up to room temperature more quickly than the kitchen bench.

(1) Let me explain why microwaves really are a splintered wooden spoon when it comes to thawing foods. Microwaves operate on the principle of dielectric heating. What happens, is they subject food to an electromagnetic field that is constantly changing in direction. Some molecules such as water molecules have the tendency to want to align themselves in the same direction as the electromagnetic fields they're under, like how magnetics try to align their own north and south to the north and south of a stronger magnetic field. So as these molecules try to align themselves, they're constantly moving which causes friction, which in turn is given off as heat.

When something's frozen, the molecules are stuck and won't move. The only way that anything defrosts at all is that the microwave heats up those few molecules that aren't frozen, which heat up enough to defrost the adjacent molecules and so on. It's not surprising then that the outside overcooks while the inside is untouched.

Posted by Tim. # Link to this post
Tips & tricks