How to make a chicken pie that doesn't suck 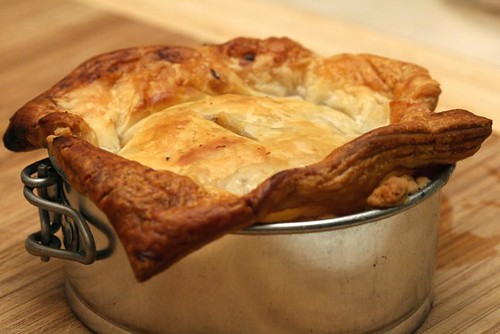 After the rousing success that was my first attempt at pie, it's taken me a surprisingly long time to make another. One of the problems is that pies exemplify the concept of economies of scale: making pasty and filling for one small pie is time consuming, but to make a little extra for a second one is a minor hassle at worst. When you're cooking for one this little fact is of absolutely no extra help — pies can be frozen, but the result just doesn't compare to freshly-baked.

Back to the pie at hand. Chicken pie. I would never choose a chicken pie. For one, my experiences with chicken pies so far have been of insipid white sauce coating poor-quality chicken and bland vegetables. What's more — and no poor pasty chicken pie is to blame for this — I'm just not a big chicken fan. A perfectly-roasted bird or a tasty bowl of soup are an exception, but on the whole I don't see the big deal.

All of the above made me shocked to learn that this particular chicken pie was one of the best things I've ever cooked. It was rich but not cloyingly so, and packed with flavour that make it so far from the anaemic chicken pies I've become accustomed to. I strongly recommend you go for the full package and make it with pastry on all sides, but if you're in a hurry by all means make the filling and whip up a satisfying pot pie.

The recipe below makes enough filling for one person's pie, although the inclusion of a lot of half-ingredients is a clear sign that you should make and eat two. 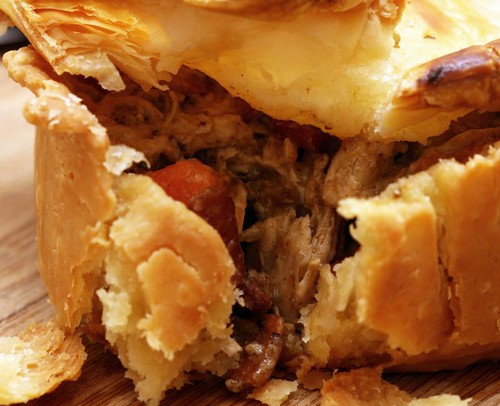 A peek under the hood

This recipe makes the filling for one chicken pie. For instructions on how to put the pie together including a recipe for the shortcrust pastry pie shell, click here.

1. Bring a small pot of salted water to a gentle boil, then add the diced carrot. Cook until just tender (5-10 minutes), then remove with a slotted spoon and set aside. Add the chicken breast pieces and poach. Remove from the water and set aside to cool. Once cooled slightly, shred the chicken with your fingers and set aside.
2. Meanwhile in a new saucepan, cook the bacon over a medium heat until it renders its fat and crisps up on the outside. Remove with a slotted spoon and reserve, leaving as much bacon fat behind as you can. Turn the heat up to high, then add the mushrooms, a hit of salt, and about 1 tbsp of butter. Set the cooked mushrooms aside with the bacon.
3. To the empty pan add the shallots, garlic, bay leaf, thyme, and 1/2 tbsp of butter. Turn the heat down to low and cook gently until the onion softens. Turn the heat up to medium, add a splash of brandy and scrape down the bottom of the pan with a wooden spoon.
4. Return to the pan the bacon, mushrooms, carrot, shredded chicken, and sprinkle with the flour. Cook for a couple of minutes then add the mustard, crème fraîche, milk and bring to a simmer. Let this thicken until the mixture is creamy but not at all soupy. Season with salt and pepper (I err on the salty side so it doesn't get lost amongst all that pastry). 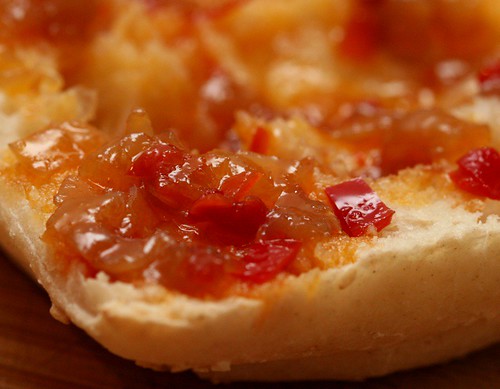 One thing that bugs me about jam is the amount of fruit needed. TV cooks act like acquiring 1kg of fresh blueberries is as trivial as picking up a carton of milk, but have you bought fresh berries lately? Those things are pricey. Cooking your own is a great way to make it just the way you like it — I find most store-bought jams too sweet — but the stingy angel on my shoulder won't allow me to buy $20 of summer's finest fruit only to boil it to a pulp.

That's why savory jam is so good. Also known as relish or chutney (although technically a chutney isn't made to keep, says Wikipedia), savory jams are cheap to make and packed with flavour. My favourite way to use savory jams is to spread them on a sandwich to sneak in spices and aromatics that you otherwise wouldn't be able to easily serve between two slices of bread. I made the chilli and onion jam below to spread on a lamb burger (recipe to come), but it really hit the spot on Saturday, on toast underneath a generous serving of scrambled eggs.

While I've given some amounts below, the ratio of ingredients you use is totally dependent on your own tastes. Scale back the chilli for a sweeter, less spicy result, or use milder chillies in greater amounts for more of a capsicum flavour. Also up to you is the seasoning. I tinker with the ratio of sugar/salt/vinegar until the result tastes good to me, and so should you.

1. Add the oil and spices to a saucepan and bring to a medium heat. Stir in the diced onion and chilli with a sprinkling of salt and cook over a low-medium heat until the onion softens and starts to turn golden without browning.
2. Cover with just enough water, then reduce the heat to as low as it will go and cook slowly for about an hour. If it's looking dry, top up with a little more water so that everything cooks until soft.
4. Adjust seasoning with salt, brown sugar, and red wine vinegar. Cook for another 10 minutes over a medium heat then transfer to a jar.