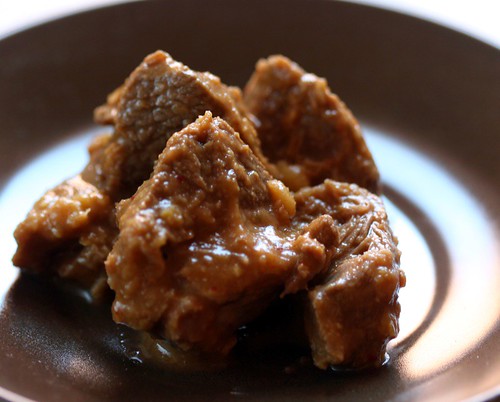 Does anyone remember 'spice advice'? A part of me knew that promising a semi-regular feature would be doomed to failure. I put together this recipe for a spice advice feature on cumin, and while I won't go through the whole rigmarole of describing cumin in excruciating detail, the recipe was already written and the photograph already taken, so it would be foolish not to get it out there.

What I will say about cumin is that it is the best. It's never going to have the surprising, special-occasion wow factor that spices like saffron have, but it's an all-rounder, a staple of so many varied cuisines that it deserves maximum respect. As with many spices, it loves a bit of toasting.

Here I used it to make a curry of lamb & chana dal. I may not have taken the most appetizing photo, but believe me when I say that this is a hearty and comforting dish.

1. Toast the cumin seeds, coriander seeds, and dried chillies over a gentle heat for about 5 minutes until fragrant, then remove to a spice grinder and grind to a powder.
2. Sauté the onion with the asafoetida, cloves, cinnamon stick, and a pinch of salt for 5 minutes to allow the onion to begin to go translucent. Add the garlic & ginger paste and fresh garlic and cook for another minute.
3. Pour in the spice powder and canned tomatoes and cook over a medium heat until the tomatoes start to break down. Add the diced lamb and chana dal with enough water to just cover, and bring to a boil.
4. Reduce the heat to a simmer, and simmer covered for 2 hours or until the lamb and dal are tender. If it's looking too dry, top up with a little extra water. Alternately if it's looking too wet, remove the lid and simmer uncovered to reduce. Salt to taste, and then stir in the ghee so it melts through the curry. For the best flavour, make this one day before serving.

(1) Use a braising cut such as lamb neck.