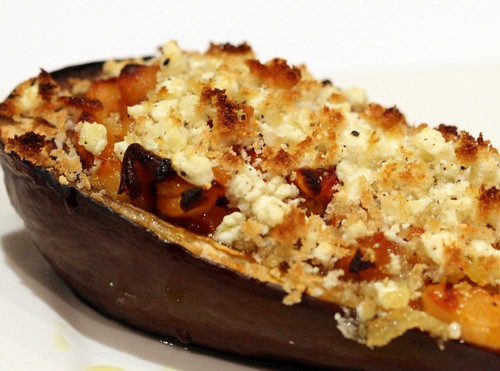 Spoiler alert! This was awesome.

You might recall from the recent pork entry that I was unsatisfied with the feta crumble. The flavours were all there, but the crumble's texture was stodgy and lacked any of the satisfying bite I was expecting. I intended not to follow that exact recipe again, but the promise that drew me to try it in the first place was still there. The seed was planted, and I was determined to make a satisfying feta crumble.

This time though, I used the crumble as a filling for stuffed eggplant. I have Peter's stuffed eggplants to thank for the inspiration and rough idea of how to cook the thing. I'm sure he won't mind that I bastardised his recipe, because this turned out really, really well. The eggplant's skin could have been more tender (not entirely sure how to make this happen), and I can see this becoming a staple side dish in the second pancake household.

The changes made to the crumble were minor, and more or less along the lines of what my gut told me the first time I was making it. Rather than mix the crumble ingredients into the beans I baked the eggplant stuffed with the beans and scattered the crumble over the cooked eggplant for a final blast under the grill before serving.

1. Preheat the oven to 200ºC (400ºF).
2. Cut the eggplant in half lengthways and scoop most of the flesh out of both halves. Roughly chop the eggplant flesh, salt it well, and set aside on top of a piece of cheesecloth for 5-10 minutes.
3. Meanwhile, prepare the crumble: combine the feta, bread crumbs, oregano, and some cracked black pepper in a bowl.
3. Bring the baked beans a 2/3 cup of water to a simmer. Take the eggplant pulp, fold the edges of the cheesecloth up and wring out all of the excess water from the eggplant. Add this pulp to the simmering beans and cook until reduced by 3/4 (the mixture should be quite wet but not soupy).
4. Pile the baked beans mixture into the shelled-out eggplants and place on a baking tray in the oven. Cook for 50 minutes.
5. When the eggplant is cooked through, remove the tray and turn on the grill (broiler). While it heaps up, generously scatted the crumble mixture over the eggplants. Drizzle with olive oil and place under the grill for 5 minutes or until browned. Serve drizzled with extra-virgin olive oil.