In rememberance of cork 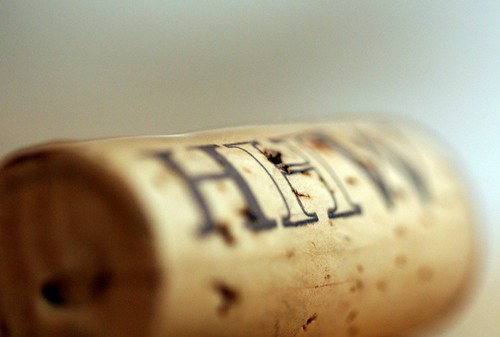 My first corkscrew was a true gentleman: The Duke of Cork. He was a good mate- a double hinged waiter's friend with a pleasant grip. He and I parted ways when I was late for a flight and had to take all my luggage on board, sans hijacking instruments. For a while I screwed around with whichever corkscrew would open up for me. Sometimes it was the cheap and nasty disposable corkscrew whores you find in hotel rooms, sometimes it was a high class girl with gorgeous pins, sleek lines and a smooth sigh as she opened my bottle, so to speak. Though I enjoyed those hedonistic days, I decided it was time to settle down with someone more permanent. I found my true love in Chile, in an antique store. She's a little past her prime, it's true, but I wouldn't have her any other way. She's an old goat's horn, starting to split and splinter, with a blackened old screw rudely jutting out, ready to get stuck into any bottle it sees. She's no nicely levered lass- this delighful old bat is stubborn as a mule. Once you've got her in the cork (no mean feat) you've got to do the old fashioned bottle between the legs trick to get anywhere at all.

And all this is ending. Every winemaker in the Clare Valley turned their backs on cork almost ten years ago now, turning to aluminium Stelvin screw caps. Henschke will shortly release all their wines under a nifty glass cap, including their super premium Hill of Grace. A wander along the aisles of any bottle shop in the country will make it clear who's winning the battle. Cork is losing friends fast.

I'm not so naïeve as to think that romantics like me stand a chance against the forward march of economics (and one bottle in ten ruined by cork taint is a hard argument to counter), so let this stand not as an impediment to the Stelvin stampede, but simply as an ode to a centuries-old part of winemaking. Who among us wine drinkers doesn't feel the onset of salivation as soon as we hear that glorious sound of a bottle being liberated from its cork? Who would be happy to replace a soaring champagne cork with a metal cap and a keyring bottle opener? The humble cork has done its job- perhaps imperfectly- but it has done it for long enough to deserve a proper farewell, instead of this hurried redundancy. I grew up with a wine-cork pin board, with a sandwich toaster held open with reused corks, with fake beards applied using the burnt end of an old cork. Many a camping trip has been enriched by the frantic search for something, anything, to get a cork out of a bottle (and enriched even further by the eventual success).

Enough remeniscing, though. Our spongy wooden friends are still around, though in dwindling numbers. I'll save the eulogy for their funeral, and simply end with a plea for all to savour these glorious, endangered seals while they still last.