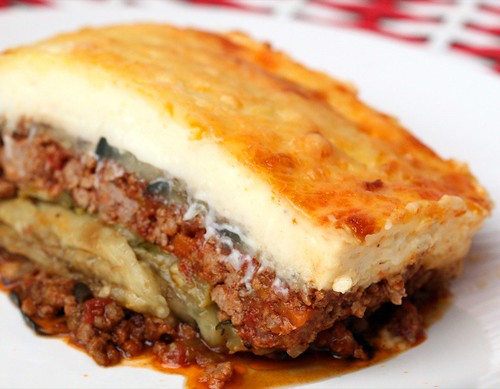 I've decided that it's more taxing to write a recipe for moussaka than it is to make the damn thing. Although the moussaka photo has been up on my flickr page for a few weeks now, I've been putting off writing the post because, ugh, who can be bothered? It's not that the recipe is even that complicated. Sure it is a multi-part recipe with grilling, bolognesing, béchamel saucing, and baking but you've done all of that before. What gets me is the futility of trying to perfect amounts. Your baking dish is bigger than mine, your eggplants are smaller than mine, but none of that matters. What this recipe boils down to is the following:

1. Cook some bolognese with cinnamon and cloves1, about 750 g of meat's worth.
2. Make a big batch of bechamel sauce, maybe 75 g of butter's worth2. Mix it with half to 1 whisked egg & a generous grating of nutmeg.
3. Season and grill a few layers worth of sliced eggplant.
4. Layering from the bottom up: Thin layer of bolognese, the eggplant, a sprinkling of dried Greek oregano, a thicker layer of bolognese, and the béchamel custard. Finally sprinkle with grated hard cheese, such as Greek kefalotiri (reggiano works fine, too).
5. Bake in a 175ºC/350ºF oven for an hour or until golden on top.

But is that enough? There has to come a point where a certain level of knowledge can be safely assumed, particularly with readers as talented as your fine selves. Are you flattered enough yet to forgive my laziness?

(1) I recommend my summer bolognese, adding 5 ground cloves and 1 whole stick of cinnamon at the beginning with the onions. A mixture of half lamb mince and half beef mince works well for this. Finish with a grating of nutmeg.
(2) We've made béchamel before, for macaroni cheese and tuna mornay. Make the sauce using butter, flour, milk, salt, and nutmeg, but unlike those recipes stop there and don't add cheese and such. Mario Batali, unsurprisingly, has also made it.