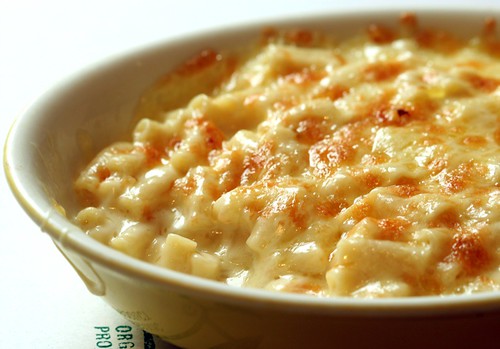 See the strand of melted cheese over the edge of the bowl? If you make this recipe you get to eat that

Oh shit, I have a website. Huh, I totally forgot about that. Sorry!

I've been busy lately. In addition to all of the usual holiday shenanigans (turning up and eating a lot), I graduated from university and joined the world of full-time work. Good fun. Unfortunately the long hours have made cooking new things difficult — the biggest hurdle is my lack of availability when the fresh produce markets are open — but I've taken that opportunity to cook with what I have around the house, which has led me to revisit a few of my old recipes.

While some of the recipes on this site are old favourites (and some aren't even mine), a reasonable proportion of them are written up after my first or second time making them. A brief, slapdash audit of the site has seen many of the recipes stand up to review, but if I could ask for a do-over it would be for the macaroni cheese.

The original recipe I posted tasted good, but it was a little too thick and there was too much sauce for the amount of pasta. Also, while I'm still a fan of the double-crust (cheddar topped with parmesan then grilled, giving a crunchy top with melting cheddar underneath), when I remade it I couldn't be bothered. Oh yeah, I also used bacon stock.

You see, since discovering bacon stock a few weeks ago it is now used in place of all other liquids. Carbonated it makes a refreshing but hearty cool drink, and if you don't mind being followed around all day by stray dogs it is perfectly fine to take a bath in the stuff. By boiling macaroni in bacon stock you infuse the pasta with bacony deliciousess and can satisfy the holy trinity of comfort food (cheese + bacon + starch) without pesky bacon bits getting in the way of the fun.

Something else you might notice in comparing this entry to the first macaroni one is the difference in photo quality. I've been trying to work on my photography skills, and thanks to a better understanding of lighting and a little colour correction I think I've definitely made some progress. Go me!

1. Melt the butter in a saucepan with the flour. Cook this paste for 1 minute. Add the mustards and first quarter cup of milk and stir to combine. It will be lumpy at first but should thicken up with stirring.
2. Pour in the second quarter cup of milk and stir until it is smooth, then repeat with the final quarter cup of milk.
3. Preheat the oven grill/broiler. Add the cheese (minus 1 handful), pasta, and bacon-flavoured pasta water to the sauce and stir through until the cheese is mostly melted.
4. Pour this all into an oven-safe bowl or small casserole dish, scatter the top with the reserved cheese, and broil until the top is golden brown.

Bacon you can drink through a straw 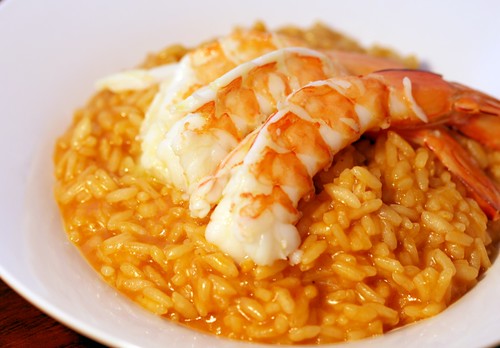 Let me clarify. Bacon: amazing. Risotto: delicious. Together: no thanks. There's something about the clash of textures, too harsh, too chewy, that I can't get behind. It's a shame, really, because the flavour of bacon is perfect for risotto. Salty, meaty, and slightly smoky? How can that not work with starch, cheese, and butter?

Referring back to my original risotto guide, the solution came from first principles: risotto being stock, rice, and the-rest-of-it. There's no real bacon-flavoured rice — If exists it likely comes from a packet and tastes horrible — and I've already complained about making bacon the-rest-of-it, so what we need is bacon stock. Hey guess what? I have bacon stock!

1. Cook the bacon slowly in a large heavy-bottomed pot until it is deeply caramelised. Expect this to take a while. Pour off any fat and return to a medium heat.
2. Add the tomato paste and cook for 1 minute, then top up with 1.5-2 L (6-8 cups) of water and bring to a medium simmer. Simmer for 2 hours, then pour through a fine mesh strainer.

A few notes: Dicing the bacon before cooking means that there will be more delciously caramelised surface area to infuse into your stock. Don't add any salt to it either (you shouldn't be adding salt to your base stock anyway) as the bacon and tomato paste are already pretty salty. Finally, bacon can be very fatty, so you will want defat it. Either cool it in the fridge overnight and strain out the solidified fat, or use this handy trick.

With your bacon stock made, bacon-flavoured risotto is easy as pie. I used my basic risotto recipe, with some minor modifications. Because I failed to follow my own advice (salted the bacon out of habit, and didn't defat out of impatience) my stock was both salty and fatty. As a result the risotto didn't need extra butter or cheese. The bacon fat emulsified with starch from the rice to make a creamy risotto, and sans cheese it went perfectly with butter-poached prawns (screw you, heart disease). A pinch of cayenne pepper perked it up, and I was set.

Nerding it up with potato gratin 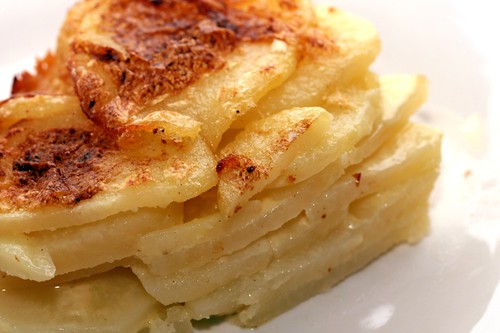 Potato gratin makes me anxious. I'm not anxious to eat it, of course — who would be? — but rather I never feel in control. You're expected to submit to the oven a tray of soupy, raw potatoes and end up with a creamy, tender, caramelised final product. What if the potatoes are undercooked, though? What if it's too wet? It's just too much pressure.

I'm a big fan of scalable formulas in cooking. I have a few stored away already: pasta (1 egg per 100g flour), shortcrust pastry (1 part butter, 3 parts butter, 4 parts flour), and quiche custard (1 egg, 1/3 cup cream, 1/3 cup milk) all work pretty well for the amounts I cook. What's more, by using these over and over I get a sense for what 'just right' looks and feels like, to the point where in some cases I don't need to use them at all. What I need is a formula for potato gratin.

I should warn you now that this entry doesn't contain a tried-and-tested formula, just some preliminary notes. I searched Google for "potato gratin recipe" and looked at a handful of results to see what ratio of potatoes to cream were used. Exclusion criteria were recipes that mixed cheese in with the potatoes (rather than simply on top), recipes with milk or other liquids (because it just gets tricky), and those that didn't include potato weight (seriously, what the hell is '1 average potato'?). In addition to learning that I am a huge nerd, we can also see that the ratio tends to be around 0.45. Of course, there's more to potato gratin than potato and cream. There's cooking time, oven temperature, and the shape of the dish. A shallow gratin will cook quicker, a hotter oven will brown the top faster, and a longer cooking time will reduce the cream more. Within the next couple of weeks I hope to test these results using different ratios and dish sizes. Then I'll eat the results and put on 10kg. It'll be awesome.

Meanwhile, here's the recipe for a gratin I made the other night which worked out really well. You'll see that I wussed out and cooked the potatoes in cream first, but hey, Thomas Keller does it so it can't be that bad.

1. Use a mandoline or sharp knife to cut the potatoes into thin slices. Wrap up the thyme, bay, peppercorns, and one clove of garlic in cheesecloth, and tie with string to make a neat little package.
2. Combine the cream, water, mustard, and nutmeg in a high-sided frying pan, then add the herb parcel and bring to a very low simmer. Simmer for 5 minutes to begin infusing. Salt the cream very generously — it should taste about the upper limit for what would be palatable, but not ridiculous1.
3. Preheat the oven to 180ºC/350ºF. Add the potatoes to the infused cream (keep the herbs in there as well) and cover. Simmer very slowly until the potatoes are just tender.
4. Rub the sides of a medium-sized baking dish with the cut side of a halved clove of garlic, the discard the garlic. Remove the potatoes from the pan into the baking dish, being careful not to break them as they'll be somewhat fragile. Discard the herb parcel.
5. Pour the cream over the potatoes, and bake until the potatoes are tender and the crust is golden.

(1) Once you add the potatoes it won't be excessively salty. 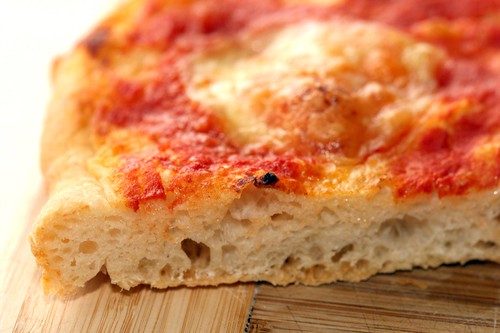 Is it lazy to take shortcuts? Does it make you less legitimate as a cook, or less dedicated? Can a guy who rallied against instant pancake mix maintain any integrity as he posts his second no-knead dough recipe?

The thing about a shortcut is that it's only worthwhile if it still gets you to your destination. If you cut through some side streets and wind up going the opposite direction, it's not a shortcut, it's the wrong way. The same is true for cooking — Sandra Lee's corner cutting is an embarrassing false economy, but true shortcuts make you more efficient and remove some of the frustration that can bog down even the most enthusiastic cooks.

For me, kneading is a step I will happily forgo. Medium hydration doughs are actually quite therapeutic to knead by hand, but the two doughs I make most often are either relatively stiff pasta dough, or pizza dough. I love the big, random air bubbles and thin, crunchy crust that high hydration gives a pizza dough, but if you've ever tried to hand knead something that sticky you'll forgive me for taking the easy way out. This recipe is only 65% water, next time I plan to go ever higher.

Bakers who know about the science of bread may shake their head at this recipe, but the fact remains that it produces a damn tasty pizza base. The extended rest boosts the flavour, and it develops enough gluten to give the dough some chew thanks to the large amount of water. I haven't reached (homemade) pizza heaven yet, but I can see the light and I'm floating towards it.

Recipe after the jump.