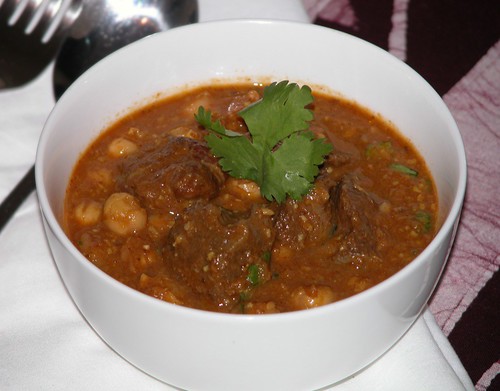 Mmm, curries. Warm, satisfying, aromatic, and yet intimidating to so many cooks. I know heaps of people with Indian or South East Asian cookbooks who have only cooked a curry once or twice, if at all. When they did, they went and bought fourteen different spices which I guarantee you are now sitting at the bottom of a cupboard gathering dust — each one a meagre teaspoon less in volume — then spent the whole day cooking the thing. For many the end result was probably delicious, but others ended up with tough meat or bitter flavours and it was such a pointless bother they'll never do it again.

That's the problem with cooking by rote, blinding following a recipe without thinking about what you're being asked to and why. It's the reason people attempt Sandra Lee recipes. She's such an easy target, but look how many people covered tempura prawns in a whipped cream and jarred mayonnaise sauce. And put it in their mouths!

Sorry. Just because you've had a hard time making a curry, I'd never accuse you of wanting to make a Sandra Lee tinned pineapple and ketchup pie (link coming eventually, it'll happen). It's just that curries lend themselves to rote cooking because people aren't confident enough with Indian cooking to second guess the recipes. If you've never had a fenugreek seed, how would you know how much to add? How would you know how much to toast it? Unless your Mum was Indian, well, you probably wouldn't know. And that's okay.

But you can know. Curries are basically Aromatics, Spices, and The Rest of It. It's such a simple framework that can be turned into a million different curries by someone who knows how to handle the ingredients. Start here, Meena will show you how. She'll be the Indian Mum you never had. Now here's a curry I made yesterday afternoon to use up some beef and freeze for busy evenings.