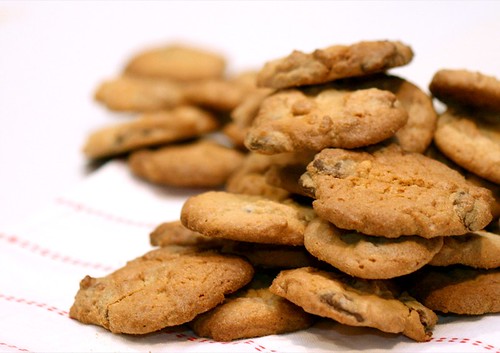 I don't usually worry about this sort of thing, but I'm pretty sure I've put on weight in the last 3 days. Currently I'm working in the country, and Lucy (who is back from Japan! Yay!) came to visit me for a week. On the last night she was here she made a big batch of cookies then flitted off back to Adelaide, leaving me alone with the cookies for a whole weekend. Of course I did what any sensible person would, and I ate them in moderation... at frequent intervals.

The cookies in question were Nikki's peanut butter chocolate chip cookies, and they're pretty damn damn tasty. My only criticism is that these weren't as chewy as advertised, which leads me to wonder aloud to all bakers: what makes for chewy cookies? Despite being a fan of chewy cookies I was able to nobly overcome my own personal biases for this recipe and eat about sixty of the things.

So I guess you could say that I have grown in more ways than one. It's touching, really.

1. Preheat oven to 190ºC (375ºF).
2. Cream the butter and sugar, then beat in the vanilla extract and egg. Beat in the peanut butter until the mixture until combined well.
3. Stir the flour, baking powder, and salt into the mixture until smooth, then mix in the chocolate chips.
4. Onto a sheet lined with baking paper, drop the dough in heaps tablespoons about 2 inches apart. Bake for 12 minutes or until golden.

Please excuse me while I geek out for a moment. I've added a feature to the individual entry pages of this site that displays links to 5 random posts from the archives. It requires a bit of a workaround for TypePad, a work around that I spent a while searching for. This won't apply to the majority of you, but I'm posting it here to save the next person a bit of time.

The hows and whys are after the jump.

I won't lie, this is a filler post. That said, there's nothing slack about these sites:

Jeff Varasano's NY Pizza Recipe: You know the scene in Sev7en where they're searching the killer's apartment and they find hundreds of notebooks filled with obsessive rants? This page is his pizza notebook. The site consists simply of one long page full of text and pictures covering one man's quest for the perfect pizza. It changed the way I make pizza and took away my fear of baking in general. In fact Joanna from Scalloped Edge recently make a great looking pizza using some of the tips I learned from Jeff Varasano.

Wild Yeast: My favourite baking blog. I love the satisfaction that comes with successfully cooking my own bread, but I can never maintain a regular baking schedule — I just don't have the stamina to allow my life to be ruled by the timetable of millions of yeast organisms. Even if you don't intend to bake twice a week, everyone interested in cooking should bake bread at least once from their own starter. Susan's dedication to bread is awe inspiring, and she's an excellent teacher. Her Norwich sourdough and quintessential sourdough starter tutorial are an excellent place to start.

Olive Juice: Yes, the third-person copy of the rest of the site is cringeworthy. It made me really want to dislike the site, but there's no denying that it's a great food blog. Beyond the mandatory Hummus and Tabbouleh are recipes for some Mediterranean dishes you won't find anywhere else. It's a young site and I'm astounded by how much effort each entry must take — I hope Tony can maintain the high standard.

First there was xfinity.net. With its dynamic, futuristic, and sensical name it lasted 3 years and saw me through years 8 to 11 of high school. After that came tweedtrousers, which was short-lived but no less critical to my personal development and lack of romance in year 12. Then as uni began I flirted with livejournal before discovering she was emotionally unstable and just a bit too emo for me. In the following year I gave the whole blogging caper one more shot before moving on, having realised that voicing my every inane thought to was what close friends and strangers on the bus were for.

But here we are, another blog. Forget the tedious personal minutiae. I hope to fill these pages with food and drink, and I hope that it will make you hungry.